This slideshow is best viewed on a fast network with browser that supports Flash Player. Please use arrow keys or mouse over to navigate. 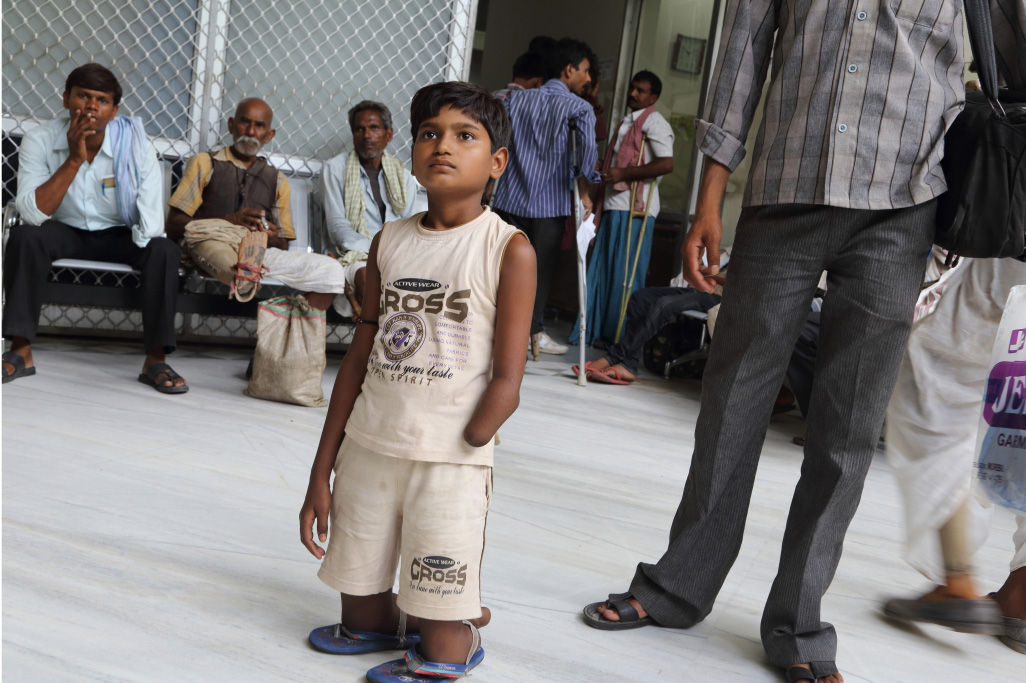 A child waits for his turn to see a doctor and get registered for a set of artificial limbs at the hospital. 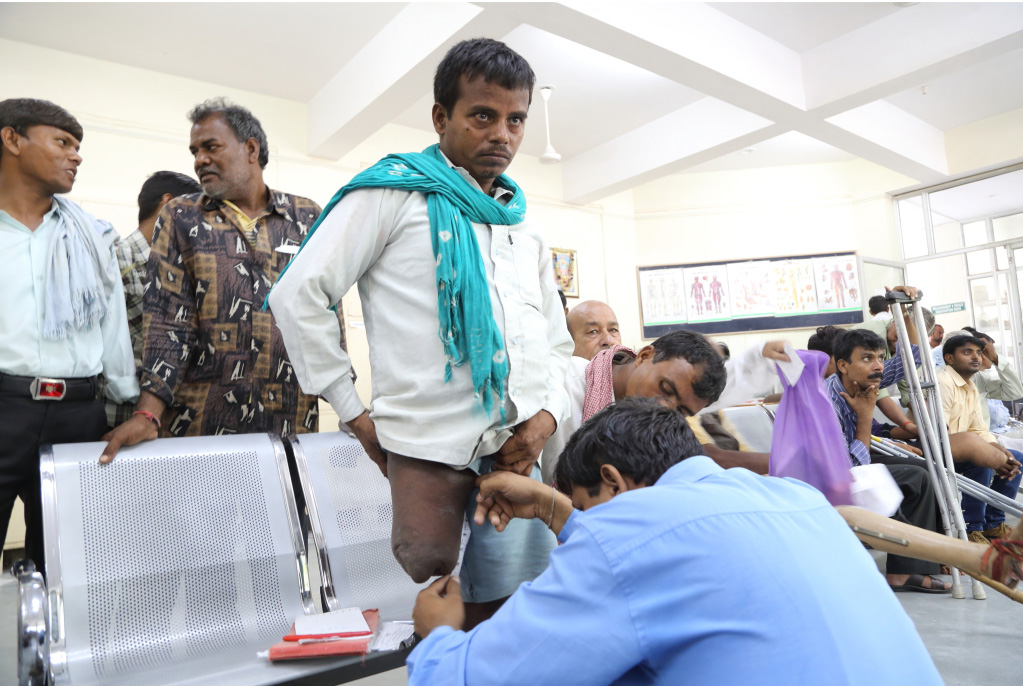 A man gives measurement for his "Jaipur Knee" prosthetic. 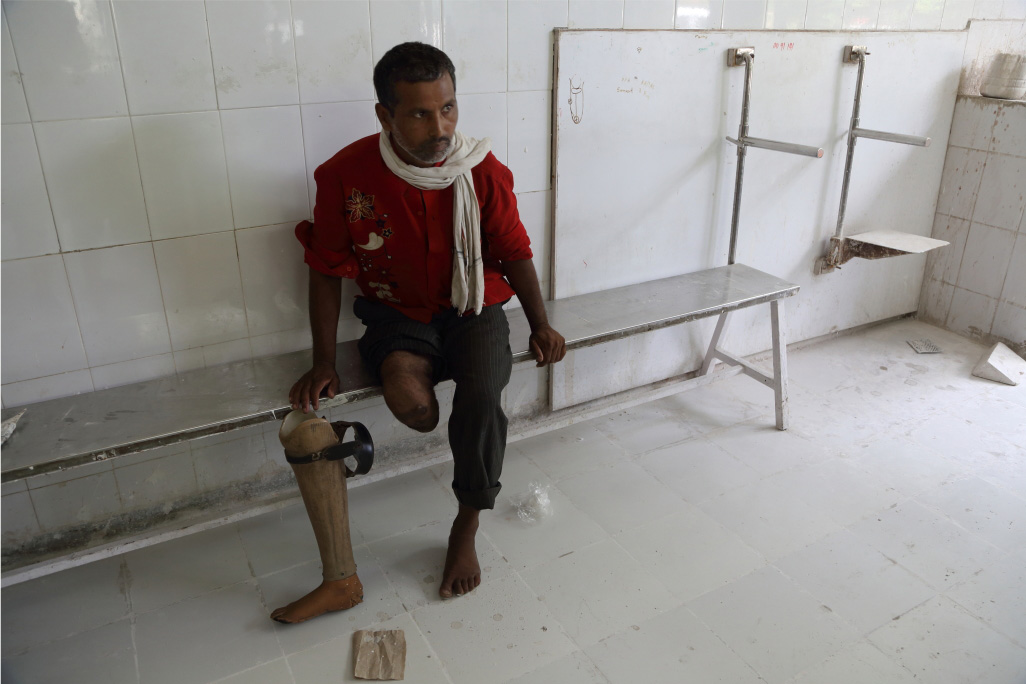 A man waits for fitting of his replacement limb. 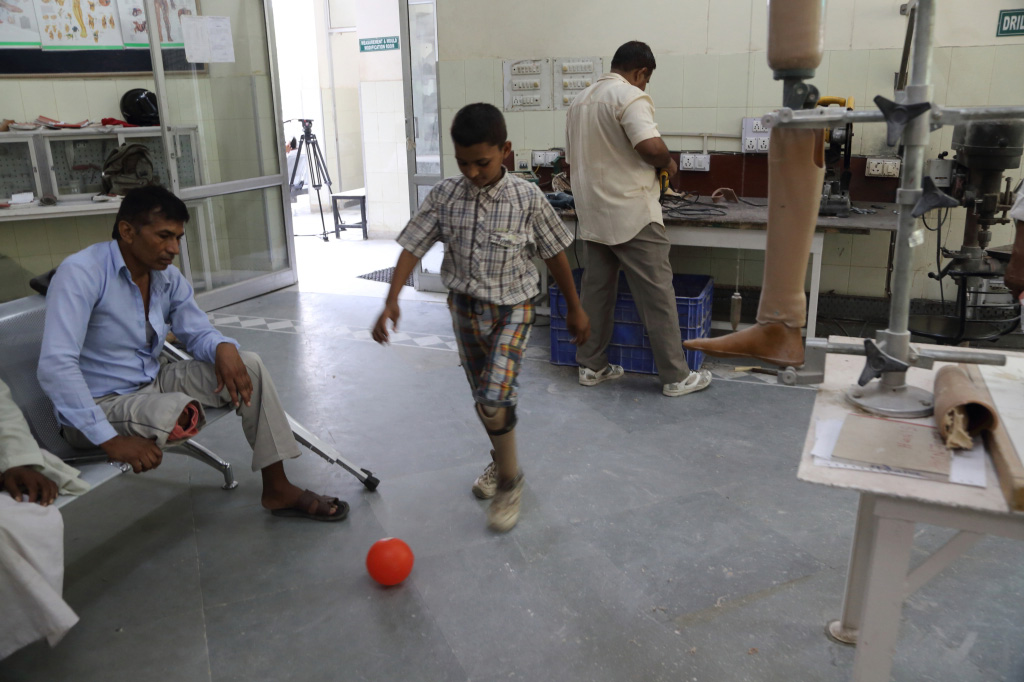 A boy, fitted with an artificial limb plays with a ball in the hospital as part of his rehabilitative process. 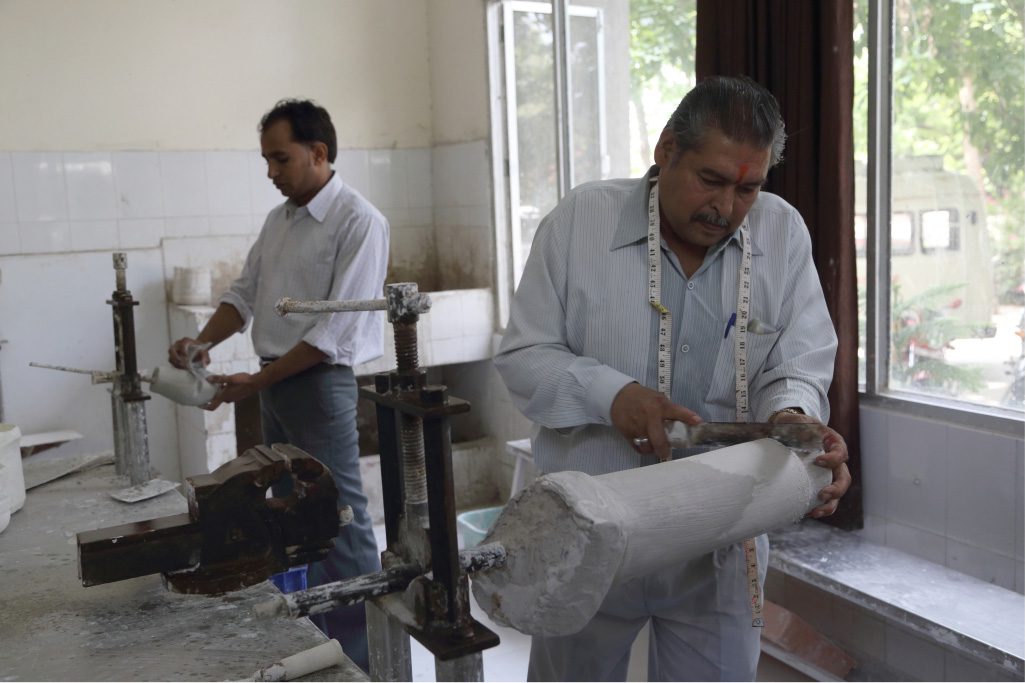 A man sculpts the plaster mold of an artificial limb. 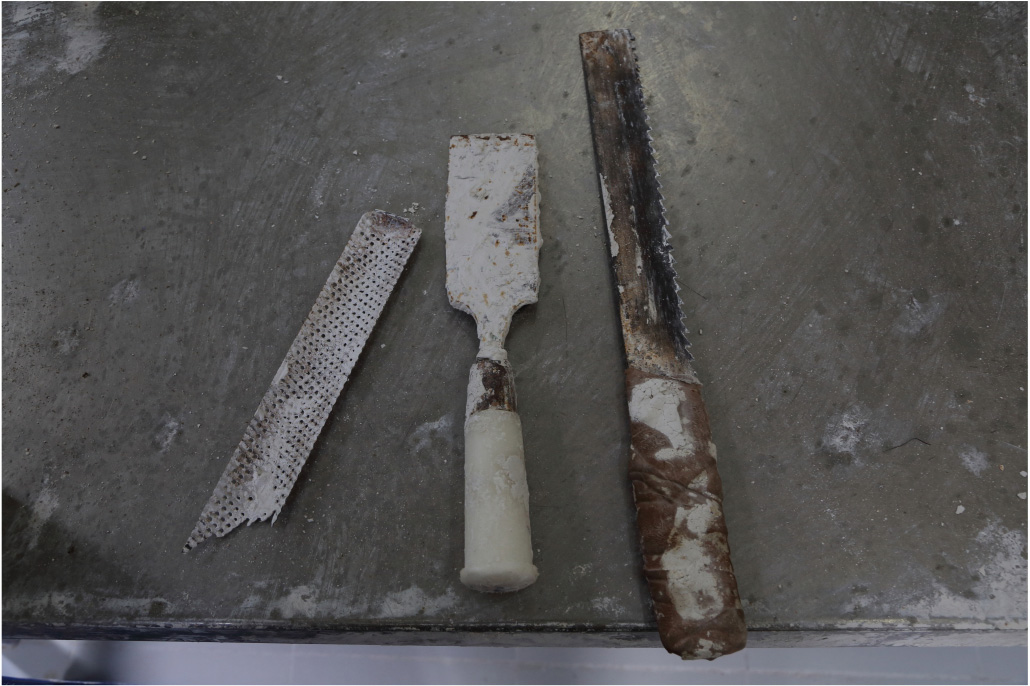 Close up of tools used for casting and sculpting the plaster mold of the artificial limb. 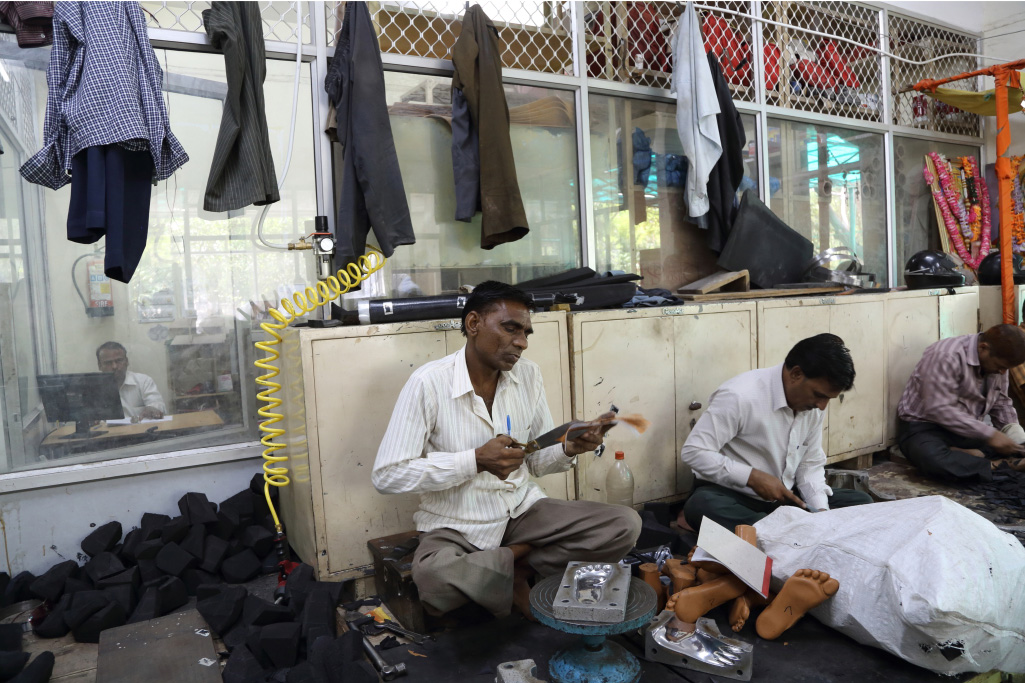 A man cuts out material for artificial skin covering for the limbs. 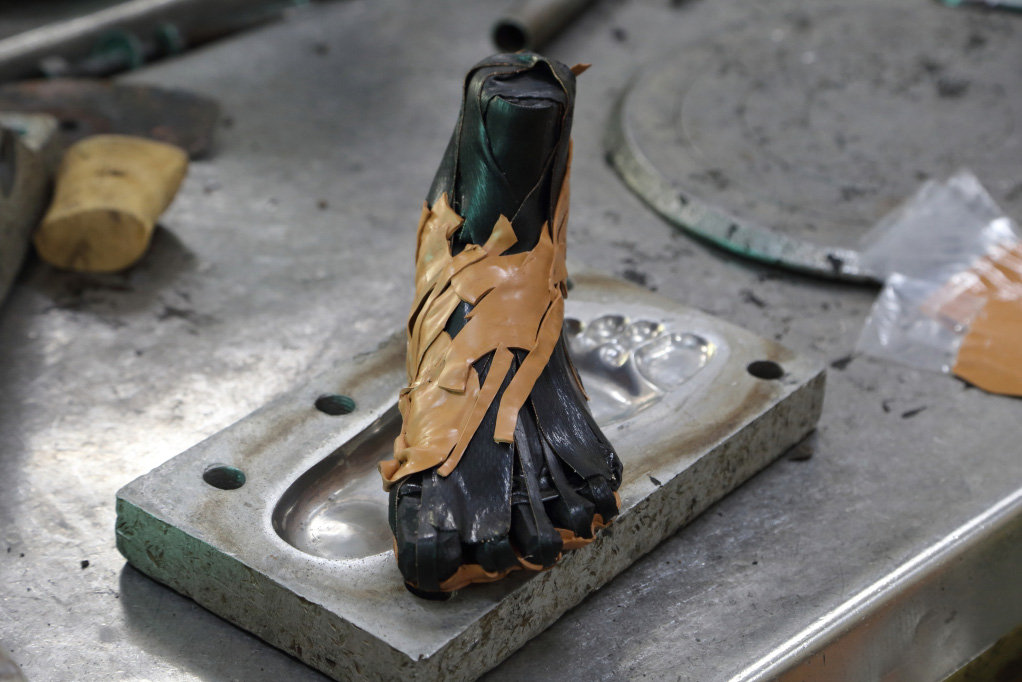 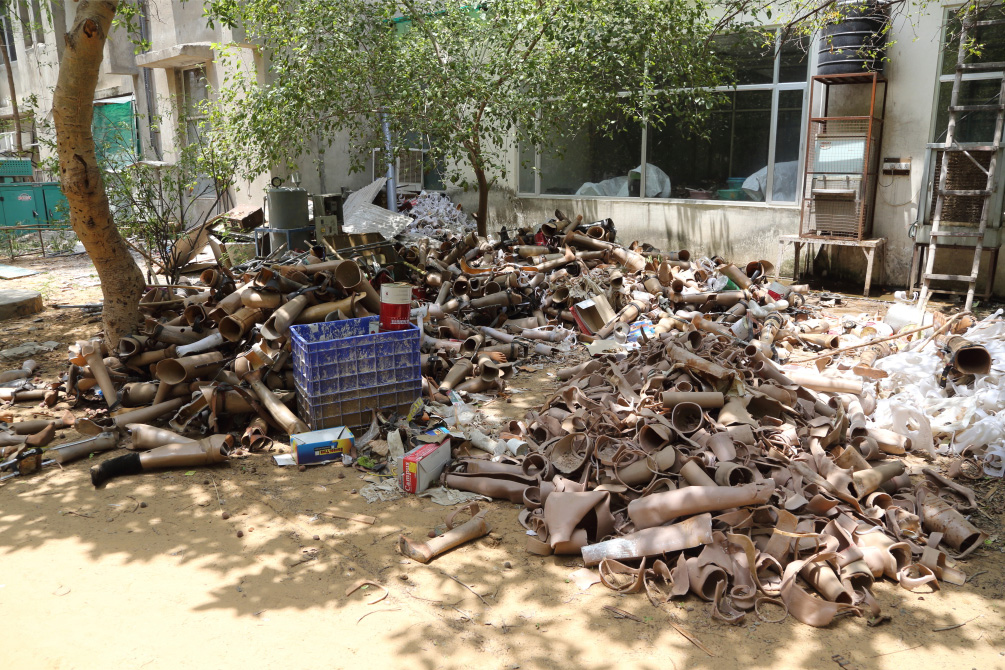 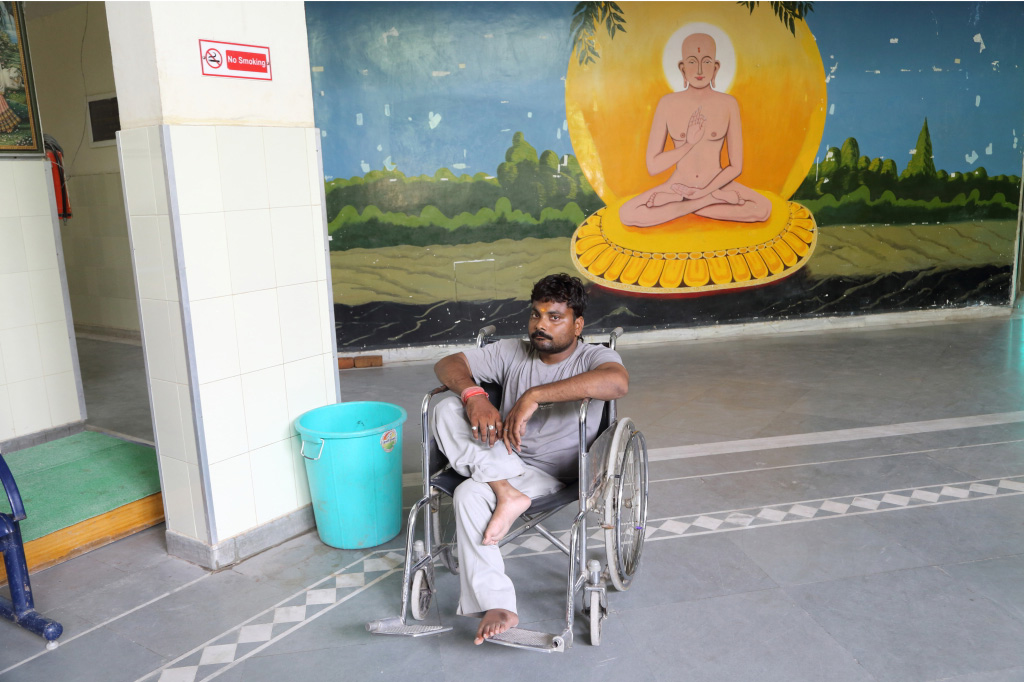 A man stricken by Polio waits to be taken into the rehabilitation centre for physiotherapy.

Situated in the city of Jaipur, Rajasthan the Bhagwaan Mahavir Viklang Sahayata Samiti (BMVSS) is the world’s largest organization for the physically challenged with a total of over 1.3 million beneficiaries worldwide . It’s primary focus is providing healthcare aids and services in the form of artificial limbs, as well as providing rehabilitation  and physiotherapy services to the financially weak and lesser privileged.

According to the Indian government’s census data from 2013, as many as 10 million people suffer from loco-motor disabilities in India, out of which 1 million are those who have lost their limbs. BMVSS provides many such cases with artificial limbs free of cost. Its “Jaipur Foot” a low cost artificial limb being the most famous.

The “Jaipur Knee” –  a prosthetic for above the knee amputees was voted one of the 50 Best Innovations of the Year by TIME Magazine in the year 2009.

” I’ve come here as I know of this place and the services it offers as my mother too got an artificial leg made from here. She lost her limb in a car accident just like me.” says 32 year old Maniram Tiwari, a poor farmer who’s made the journey all the way from western India for the final fitting of his prosthetic leg.

Apart from artificial limbs and rehabilitative care for amputees, calipers for Polio patients as well as aids and appliances such as wheelchairs and crutches are also provided free of cost, along with replacement for worn out or damaged artificial limbs.

The artificial limbs manufactured by the institution ensure full functionality and movement as well as the freedom to normally conduct one’s daily activities such as walking, running, sitting cross- legged, and squatting. The limbs also provide the ability to walk and run on uneven surfaces, climb stairs and swim.

Majority of the international demand for these limbs is from conflict stricken countries due to injuries resulting from the combat. Pakistan, Afghanistan, Sri-Lanka, Iraq and large parts of Africa regularly hold camps for their citizens to receive these limbs. Recently, the rising cost of healthcare in the USA and Mexico has also lead these countries to turn towards the Jaipur Foot.

The institution and its many sister centres across the world are largely helped by government grants as well as donations from private institutions and individuals to help it in carrying forward its work of distributing free limbs as well as for bio-mechanical research.

In 2014, the the United Nations and Stanford University agreed to provide aid, both financial and technological to help BMVSS further its cause. The institution now boasts a state of the art bio- mechanical research lab to further fine tune and mimic the movements of the human body in its artificial limbs.

The institution is also now further helping its local patients by helping them set up alternative sources of income in the form of small business such as small general stores and shops.